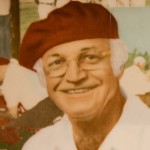 There are many men in town who would gladly accept the title of “Mr. Bakersfield.” (1) One such man was an unforgettable fixture (2) of Old Town Kern – East Bakersfield, Dr. Romain Clerou. He was a former lineman for Bakersfield High as well as for Bakersfield College. He was passionate about many things; his family & friends, his vocation, and his avocation. He practiced medicine well into his later years and also loved his hobby or minor occupation, SPORTS. He was an avid golfer. During a conversation I had with him, I mentioned I had recently taken up golf. He recommended I concentrate on work first – golf last! Dr. Clerou combined his passions, serving Bakersfield College as team doctor and making long lasting relationships along the way. On many occasions you could spot him on the sidelines of football games such as his beloved Bakersfield High School Drillers and Garces High Rams. He was considered a “twelfth man” for the ‘Gades, and his support was so great, that a new facility carried his name – Clerou Fieldhouse. His contributions to Bakersfield were numerous – not only as a doctor and philanthropist, helping various youth sports programs in Kern county.

Louis and Lucie Clerou, Dr. Clerou’s parents, immigrated to Bakersfield and started a sheep business in 1908.

(1) There are many “Mrs. Bakersfields” as well.
(2) Order a Tuna Sandwich à la Clerou the next time you eat at Wool Growers!

February 10, 1914 – November 20, 2012
Dr. Romain Pierre Clerou, age 98, was born in Bakersfield and was part of a large pioneer Kern County family. He was 5th of 8 children born to Louis and Lucie Clerou who came to Bakersfield from France over 100 years ago. With roots on the East side, his family was part of the immigrant community who helped create the business and agricultural of Kern County. Romain attended Kern County Union High School, Bakersfield Junior College, The University of California at Berkeley and Creighton Medical School.
He served in the Navy during WWII before setting up his medical practice in 1946. He was a compassionate physician who practiced for over 65 years. He delivered thousands of babies, performed countless surgeries, and was available, day and night, whenever his patients needed him. A powerful athlete, he played many different sports in high school and also played football for the Bakersfield College Renegades. He became a consummate lover of golf which he continued to play until a year before he died. His children recall a loving Dad who encouraged them to work hard and have the courage of their convictions. He was a man of the people, tolerated no bigotry, and welcomed all who needed medical care or a warm meal.
He is predeceased by his adoring wife of 47 years, Agnes, and is survived by his long-time companion, Mrs. Mayie Maitia and her family, his 6 children: Michele McEvoy (Larry), Julie Riegel, Suzette Clerou, Cecile Clerou, Claire Clerou, and Romain Clerou, his 5 grandchildren: Mollie McEvoy, Benjamin Berk, Anna Berk, Romain Clerou, Clement Clerou, and great granddaughter, Sierra Dias MacEnvoy. His grandson, Matthew McEvoy, passed away in 2004.
The family gives special thanks to Dr. Mark Root, Dr. Ed Nichols, Around the Clock Care, and to his constant friend and caregiver, Rongs Vakalutukali, for helping him take a final victory lap. A visitation will be held on Wednesday, November 28, from 1 pm-8 pm at Mission Family Mortuary, 531 California Avenue in Bakersfield. A rosary will be held on Thursday, November 29th at 11:00 am, followed by a funeral Mass at 11:30 am at St. Francis of Assisi Church, 900 H Street, in Bakersfield. His pallbearers will be his nephew, George Barnett Jr., his niece, Nancy Freeman Ulbrich, his great friend, Gerry Collis, and his six grandchildren. Donations in his memory may be made to Mercy Hospital, Bakersfield College Athletic Foundation, or to St. Francis Catholic Church.