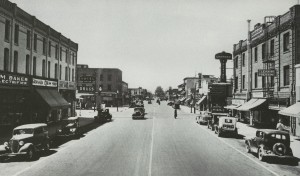 Was named for the settlement Edison, approximately 10 miles east of town. Edison itself was named for the off-loading railroad siding to ship Edison Power Plant equipment up the Kern River for power development. [Source: Curtis Darling’s father’s friend, Frank Leeper, as told to him in 1927. Leeper was a working practical engineer on the project in 1907-1908.]

Truxtun was named after Truxtun Beale, the son of General Beale, owner of Tejon Ranch and donor of the Truxtun children’s library on the corner of 17th and Chester Avenue. Truxtun Beale also donated the Clock Tower. Originally Truxtun Avenue was labeled Citizen’s Avenue by Colonel Thomas Baker, then Railroad Avenue since it ran parallel to the Santa Fe tracks before it finally settled with the Truxtun name.

Named for Union Cemetery. The old cemetery parades used to go down Union Avenue to California even though Union Avenue was part of Golden State Highway.