He was one of the great names in local Basque history.Only he wasn’t Basque. 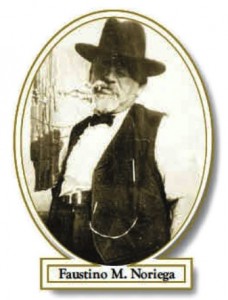 Faustino M.Noriega is regarded as one of the early developers of Bakersfield’s legendary Basque community. The oldest Basque hotel in the West still bears his name. Yet, he was really a Spaniard, born in 1856 with the given name of Faustino Mier.

At the age of 15, Faustino came to America to join his uncle Vicente Noriega, and soon adopted his uncle’s surname.

As a young man, Faustino M. Noriega worked among the Basque sheepherders in Kern County.

In 1893, partnering with Fernando Etcheverry, a French Basque from Aldudes, Faustino opened up the Iberial Hotel, a traditional Basque ostatu, a combined boarding house and restaurant. In time, the named changed to the Noriega Hotel and for some years, Faustino lived there with his wife and five children. In 1900, he built a new house for his family that still stands at the corner of Baker and Oregon Street. (Jose Mier, Faustino’s nephew, married Celine Etcheverry in 1907, who he met when he tended bar at the Noriega Hotel.)

Although he opened other businesses, he is best known as a hotelier and builder of the Bakersfield Basque community.

Faustino M. Noriega died in 1922 and is buried at the Historic Union Cemetery, space 330-13, now and forever part of the story of Bakersfield.