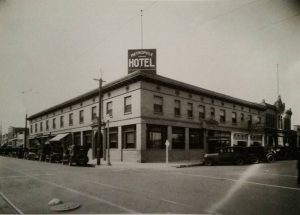 The Metropole Hotel Building on the southwest corner of Baker and Sumner. It catered mainly to railroaders and oilfield hands from 1910 into the fifties. The hotel was upstairs and it housed a number of businesses downstairs such as the French Cafe, the Bank of Italy (later the Bank of America), and Saba Brothers Clothing, which survived into the nineties further up Baker. The building is still there. The hotel is the Kern town and numerous businesses come and go downstairs.

The Metropole Hotel was built in 1895 by Jean Estribou. The turn of the century saw the start of many boarding houses. Located diagonally across the street from the train depot, the property included a market and later a slaughterhouse and delicatessen. The Metropole is located on the southwest corner of Sumner & Baker, although it no longer is in operation. Jean Estribou, was an immigrant from Ogeu, Basses-Pyrenées. By 1926, Estribou sold the hotel to Jacques and Grace Iriart who ran the hotel until 1941. The July 21, 1952 earthquake in Bakersfield destroyed the Metropole. I remember visiting the Metropole market or liquor store in the mid to late 1960s (the building might have been restored somewhat).

To add insult to injury, in more recent time the hotel sustained a fire on 4th of November 1999.