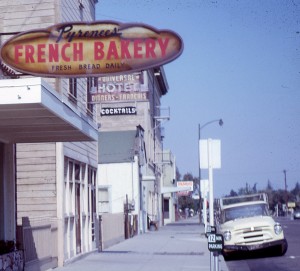 Bernard Igoa, along with his two uncles, Antoine “Toni” and Pierre Laxague, would walk next door to the Universal Hotel bar – from the Pyrenees French Bakery, to have drinks. Bernard remembers an Italian gentleman, wearing wire-framed spectacles, who tended bar.